Chidham & Hambrook Cricket Club hold an annual Golf Society at the end of each season. The inaugural winner in 2014 was Ben Gottesman and since then 4 different names have featured on the winning trophy. The first six society days were held at Chichester Golf Centre (Tower Course), the 2020 society was cancelled due to COVID and the 2021 CHCC golf society was held at the Goodwood park course on Saturday 9th October.

09/10/21: The seventh annual Chidham & Hambrook Golf Society finally got underway at the Goodwood Park golf course after a one-year covid delay on Saturday 9th October. The fourteen players were randomly split into four groups based on handicap ability and after a delicious full English breakfast the competition got underway. POD also generously donated a bottle of tasty bramble gin to each group to help ease the nerves which, along with the various concoctions in indivdual hip flasks, made for an interesting round. It certainly hindered Strudders who even managed to leave his pitching wedge on the 14th green but luckily that was handed back in at the pro shop.

The nearest the pin contest took place on the par 3 8th hole and only Vinnie and Strudders made the green with Vinnie just winning by a few yards. The longest drive hole on the 15th was also heading the way of Vinnie with his 225 yard shot until Rory, playing in the 3rd group, sent a rocket down the fairway which sailed 10 yards past Vinnie's effort to win the prize.

The team prize went the way of the 2nd group consisting of Vinnie, Alex and Clive with their best two stableford scores on each hole totalling 78 points. The wooden spoon was won by Adam Selves (15 points), who was having his first ever full game of golf, but only just on countback from POD thanks to gaining one point less on the back 9 holes. The 3rd place prize also was decided on countback with Vinnie (32) just pipping Alex (32) to the post by one shot on the back 9. Willem Van Niekerk (33) finished 2nd and the overall winner this year was Rory who scored 34 points playing off a handicap of 22, the lowest winning score in the history of the CHCC golf society.

12/10/19: The sixth annual Chidham & Hambrook Golf Society took place at Chichester Golf Centre (Tower Course) on the 12th October and ten players lined up on a damp and drizzly Saturday afternoon. Andy Clark was a late withdrawal due to family sickness. The draw was made for the teams to produce 3 equal groups based on handicap ability and players then enjoyed a full English breakfast in the clubhouse, sadly without the scheduled England World Cup rugby match which has been cancelled due to a typhoon in Japan.

The weather conditions weren't  much better in Chichester as the first group set off for their round at 11:00 starting with the short par 3. None of the players in that group made the green but in the second group Vinnie's ball landed 6ft from the pin and plugged about 3 inches deep illustrating how muddy and wet it was! The first group fared better on the 3rd hole which was the nearest the pin 150yd par 3 with Keith Davey's effort landing 6ft from the pin. Matt Rawlinson in the 2nd group was just outside Keith's effort on the same hole so Keith Davey had the first award in the bag.

Next award was the longest drive on the par 4 11th hole, Andy Wild in group 1 kept his drive straight to get his name on the board, players in the second group didn't make the fairway so it was left for John Strudwick to pip Andy to the prize with a sterling effort in the last group. The rain increased throughout the day and all players were thoroughly soaked as they finished off on the 18th hole. Andy Wild couldn't find his first ball off the tee so quickly ran back to make a second attempt which landed 50 yards from the green. He then chipped his fourth shot straight into the hold to record a remarkable par and 3 points.

Players returned to the bar to dry off and sink a couple of beers as the scores were counted up. Andy's effort on the 18th hole kept in front to win the tournament with an impressive 37 points (18 Hcap). Vinnie finished off strongly to record 35 points (17) in second place and Keith finished 3rd on 34 points (24). The 2017 winner Clive Dungar had a poor first nine holes by his standards and was never able to get back in the running, finishing in tenth place on 19 points and earning himself the "Tescos Finest" wooden spoon and yellow range ball. He was just in front of Strudders and POD who both finished on 20 points. The awards were dished out in the Barleycorn prior to the end of season cricket awards.

03/11/18: The fifth annual Chidham & Hambrook Golf Society took place at Chichester Golf Centre (Tower Course) on the 3rd November and twelve players lined up to enjoy the late autumn sunshine. Club members enjoyed a hearty cooked breakfast in the presence of their illustrious Chairman Andy Gubbs and then the draw was made for the teams, players being seeded on handicap ability, producing 3 equal groups of 4 players.

The first group out was Vinnie, Ben, POD and John - who needed constant reminders of the number of strokes he had taken on each hole. Ben hit a spectacular shot on the par 3 third hole which won him the nearest the pin prize for the second time. One of the best moments of the day, apart from the consumption of cigars and whisky, was when John's approach shot on the 5th hole knocked into POD's ball on the green and moved it 20ft closer the hole and a virtual gimme! Best of the group was Vinnie who scored 33 points which gave him third place overall.

The second group consisted of Willem, Clive, Pete and Keyno - Willem won the longest drive on the 10th with a monster shot and he also won first prize overall scoring 39 points from a 12 handicap - expect a cut next year! Clive was unable to match last years heroics but still posted a respectable 29 points and Keyno managed to scoop the wooden spoon with a not too shabby score of 17.

The last group out was Dave (making his debut), Keith, Jim and Matt (also debut) - all members of this group played very well and they won the overall team prize with an average score of 29.25 between them. Jim finished second overall with 34 points (following a second count in the clubhouse).

25/11/17: Bright sunshine and freezing cold temperatures greeted the Chidham & Hambrook cricket players as they turned up for the 4th annual golf society at Chichester on Saturday morning. Two late drop outs meant that the field was reduced to 10 players this year and as always the day started with a hearty English breakfast and cups of coffee in the warm dining room. Following breakfast the draw for the day's groups was made in true World Cup style with players being seeded on handicap ability and with the 4-ball and 2 x 3-balls all decided it was off to the first tee with thermals, gloves and hats at the ready.

Willem won the nearest the pin with a splendid tee-shot on the 3rd hole landing just 10 yards shy of the pin and Ben Gottesman won the longest drive on the 10th hole with a thundering drive that sent shockwaves through the group in front. The fact that Ben and his group even made it to the 10th hole was a miracle as they went AWOL after the 8th hole, somehow getting lost in the middle of the Tower Course - no doubt stoked up on cigars and whisky!

The Group C captain Vinnie Smith lost the plot on the 8th hole - with play grinding to a halt in front (probably due to cigars and whisky as per above), complaints coming from the groups behind and Keyno doing his best to lose all of his borrowed equipment - Vinnie smashed his drive straight into the lake, threw his club his anger, shouted a few expletives and sent his next ball straight into the trees - that put paid to his ambitions of retaining the title.

Meanwhile out in front Clive Dungar, who had asked for a higher handicap than 28 the previous week, was keeping his nerve and playing some exceptional golf and ended up winning the title on 38 points - another new name on the trophy and a suprise winner with pre-tournament odds of 16/1 - he will be playing off a 24 handicap next year. Previous winners Willem (36 points) and Ben (34 points) finished 2nd and 3rd respectively from their 12 and 16 handicaps and the wooden spoon was awarded to Gubbsy who scored 6 points on his golfing debut.

The players enjoyed a few beers after the society where the golf prizes and cricket prizes were awarded in a low-key cermeony and then a number of the team retired to the Bosham Inn for a end of season meal and a few more sherberts.

12/11/16: Chidham & Hambrook CC held their 3rd annual golf society at Chichester Golf Club on Saturday and despite the incessant rain the day proved to be a huge success. Eleven players made it to the start line this year and after enjoying a full English breakfast, in the company of our illustrious Chairman Andy Gubbs who never turns down a free brekkie, everyone donned their waterproofs, put up their umbrellas and headed to the first tee. Keith Davey, with his retro 1970s golf equipment, set the tone for the day with an amazing tee shot on the 120 yard par three which landed 3 foot from the pin. This fine form carried through to the third hole where a similar shot won him the "nearest the pin" prize - if only the whole course consisted of par three holes!

Steve Clarke decided a warm up was in order before the big game so he took part in a 3 mile race at Oaklands Park securing a PB in the process - unfortunately he didn't secure a PB on the golf course! Fair play to his dad Peter Clark though who despite being in his eightieth year, completed the 18 holes in the torrential rain and scored a respectable 18 points - hope I'm still playing at 80.

A huge angry swan greeted the group A team on the ninth green which put everyone off their putts but it was Vinnie who was spitting feathers on the next hole as his massive drive was a few yards off the fairway - Willem eventually won the "longest drive" prize with a similar shot which was just on the fairway.

Several of the players were granted a 36 handicap before the start of player to try and give everyone a fair chance but this concession almost backfired as Pete Wild produced the round of his life which would have given him second place on countback. However he decided to take off his skirt half way round and opt for a 28 handicap but still carded a very respectable 31 points. In fact all of the group A players were in contention for the title but a few late wayward shots from Davey and a hamlet moment for Chesshire in the 17th green bunker left the way for Vinnie to be the clubhouse leader on 37 points.

Willem came in next with 36 points and in the last group only Big Jim reached the 30 mark leaving Vinnie the overall winner, Willem in second place, Matt in 3rd with 35 points and Group A as winners of the team prize.

Most of the players then headed back to the Barley Corn for some pool and darts action and sampled some more of Granville's culinary delights! 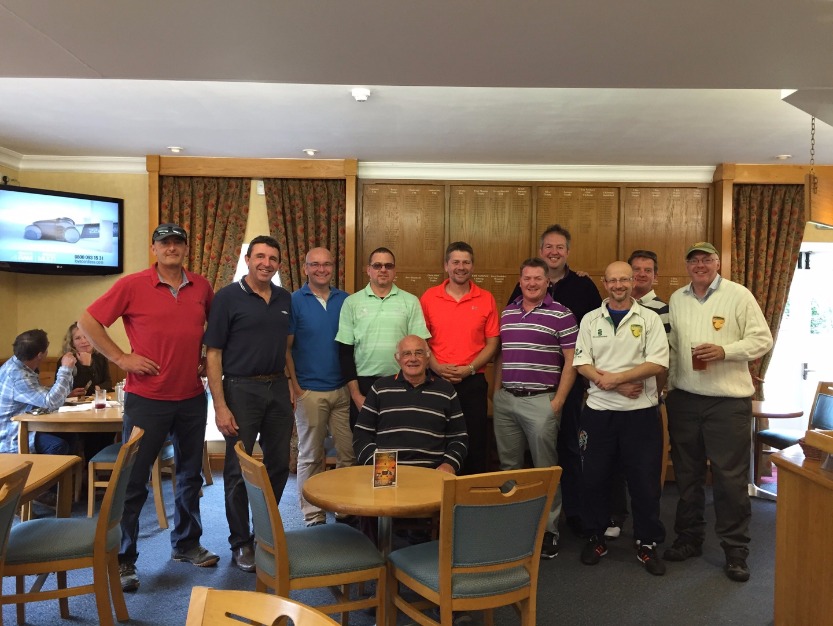