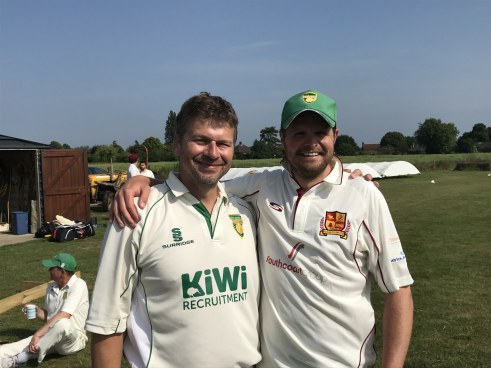 Chidham won the toss and elected to bat

Chidham & Hambrook recorded their first victory of the season against the Gents of Bedales at Bosham on Sunday but only after surviving a nail biting finish.

Skipper Rory Peterson left the pre-match duties to Steve Clark, the best tosser in the team, and he duly obliged by winning the call and electing to bat first - something the Hawks had been crying out for all season.

Peterson and Parker opened for the Hawks and it wasn't long before Parker (1) was walking back to the clubhouse after being caught out from a Raithata ball and number three Van Niekerk (2) soon followed after being bowled out by a King delivery. Thursday evening skipper Davey (3) was then bowled by Edwards and it started to look doubtful whether Chidham would see out the 35 overs.

Peterson stayed firm though and started building up a useful score and Vinnie Smith helped steady the ship with some defensive play before Peterson was forced to retire on an excellent 56 runs. McGregor joined Smith at the crease, the two having known each other some 25 years previously, and started to build up a useful partnership - Smith was eventually run out on 14 runs and McGregor reached 25 before being bowled out by Raithatha. The tail enders Dent (0), Strudwick (1), O'Donohoe (4), Keynes (3*) and Clark (5) added some extra runs to the Hawks tally which stood at 140 after the 35 overs.

Following a wholesome tea shared with family and friends in the bright sunshine, Peterson opened the bowling for the Hawks and got off to the perfect start by taking the wicket of Hicks on his fifth 5th ball with only one run conceded in the over. Strudwick assisted from the opposite end and also got off the mark in the 8th over when his ball to King was caught by Peterson and then the skipper himself bowled out Nicholls and Edwards in the next two overs to leave Bedales on 32-4 off 11 overs.

Smith and Davey joined the Chidham bowling attack and Smith got a wicket in each of his first three overs thanks to an unexpected boundary catch from O'Donohoe, an amazing one handed flying catch from Peterson close to the clubhouse and then clean bowling out Sprague. Davey was also very tidy in his five overs conceding just 21 runs. The Bedales tail enders started to get some momentum going and despite Van Niekerk bowling out Grey and Chancellor and some tight spin bowling from Keynes, the visitors needed just 7 runs off the last 15 balls to win the match but crucially only had one wicket remaining. Van Niekerk had one more pearler up his sleeve though and the gallant Pemberton was clean bowled to leave McGregor throwing his wicket-keeping gloves high in the air and the Hawks celebrating a momentous win.

Man of the Match: Rory Peterson (56 not out with the bat and 3 wickets for just 20 runs)