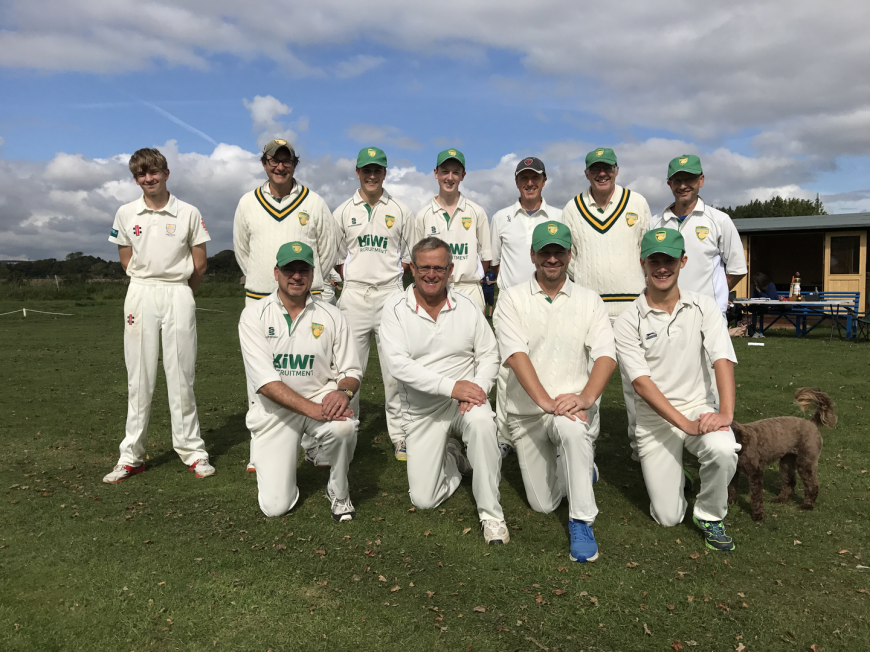 Hambrook Team Before The Chidbrook Cup

Chidham won the toss and elected to field first

Hambrook won the Chidbrook cup against neighbours Chidham for the fourth straight year in a row with a comfortable 53 run victory at Delling Close on Sunday.

The wicket and outfield looked in superb condition following the efforts of several players from both teams the day before and with the sun shining and a sprinkling of family support the scene was all set for the annual season closer.

The two captains Tom Phizackerley (Hambrook) and Keith Davey (Chidham) performed the pre-match toss up on the wicket, with Davey winning and electing to put Hambrook into bat.

Will Van Niekerk and Will Parker opened for Hambrook and it wasn’t long before the reigning champs were on the back foot as Van Niekerk (0) was run out on just the fourth ball after a moment of indecision.

Up stepped Paul Walmsley for his first game of the season and he soon got into the swing of things eventually retiring on 25 runs mid-way through the innings. Will Parker was also knocking the ball around well before eventually succumbing to a tame Simon bowl in the ninth over when on 20 runs.

Young Johnny Hodgson came in for Hambrook at number 4 and also put in some good work to reach 18 runs before being bowled LBW by Matt Chesshire. Steve Parker gave the best batting performance of the day reaching 31 runs by the innings close and Tom Phizackerley also boosted the score late on with Hambrook ending up 149-3.

A fine tea was enjoyed by players and families alike in the warm September sunshine before Hambrook took to the field to try and prevent Chidham reaching the 150 runs required for the win from the allotted 25 overs.

Jason Burt and Matt Chesshire opened up for Chidham and another moment of indecision in the match cost Burt his wicket in the 2nd over when on just two runs. The ominous Rory Peterson came on at number 3 and it wasn’t long before he was returning to the pavilion after reaching forced retirement (27 runs) in just a handful of overs –his haul included two massive sixes which even had the cars running for cover!

Chesshire was also ticking along nicely until being bowled out by a straight V Smith ball in the 6th over when on 16 runs and it wasn’t long before his replacement P O’Donohue (4) was given out LBW after a fine delivery from Johnny. J Mansell was bowled out on just his fourth ball for a duck by David Phizackerley and at this stage with Chidham on 66-4 off 10 overs Hambrook could sense victory.

Pete Wild had other ideas though and following a superb knock in a charity match at Goodwood the day before, he soon set about the Hambrook bowlers with some amazing strokes which also saw him hit his first ever six – a feat he also repeated a few balls later.

However his batting partners came and went one by one thanks to the Parker Father and Son combination of Will and Steve who took a brace of wickets a piece for very few runs; Fiahlo (4), Stecthman (0), Strudwick (0) and Davies (0).

Pete Wild eventually retired on 25 and Chidham captain and tail ender Keith Davey was given the momentous the task of scoring 62 runs with only his wicket and those of Peterson and Wild remaining. Davey was soon bowled out by his opposing captain Tom Phizackerly for just 2 runs and the returning Wild was then caught behind by Clark from another Phizackerley cracker leaving Chidham 54 runs short of their target.

Following the match amid scenes of jubilation the Chidbrook Cup was presented to Tom Phizackerley and the result now leaves Hambrook with 8 wins to Chidham’s 4 since the cup’s first inception in 2006.

Man of the Match: Steve Parker (31 not out and 2 wickets made it a great day all round for Parker Senior). 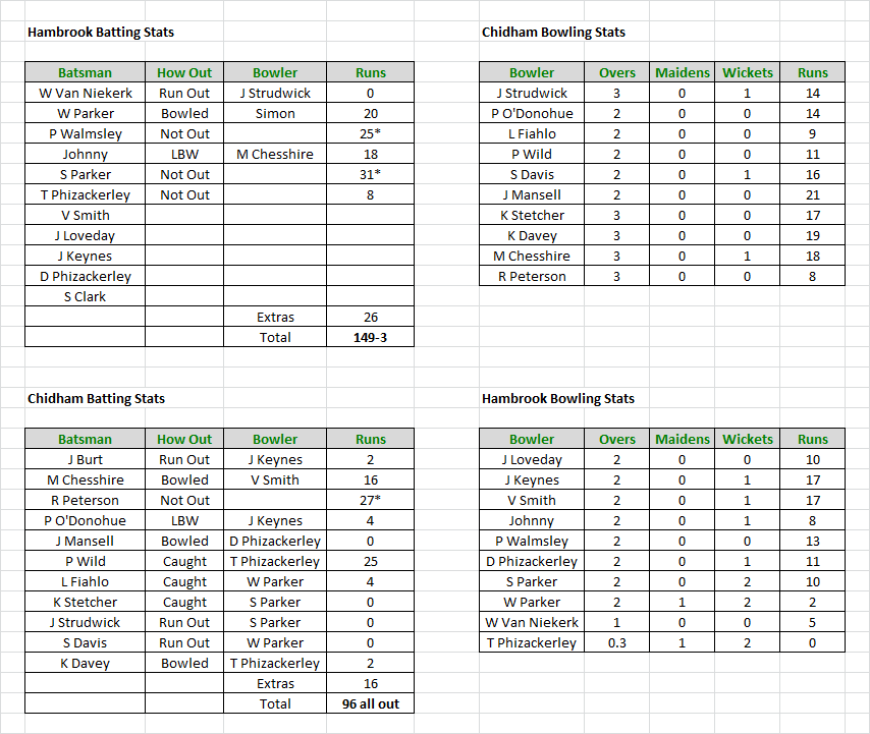