Game, Set and Match to the Hawks 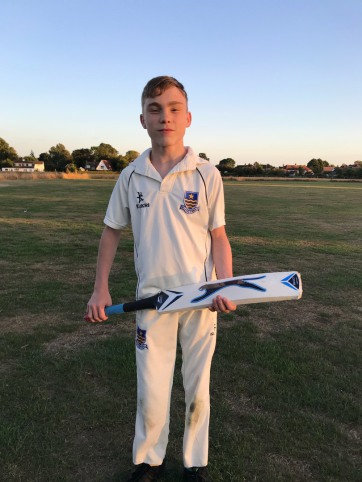 Man of the match: Joe Simpson

Tennis Club won the toss and elected to bat first

Fourteen year old Joe Simpson proved to be the hero of the day as the Hawks cruised to a 5 wicket victory over the Tennis Club on Thursday evening.

Following several late withdrawals the Hawks managed to secure the services of Keith McGregor and Joe Simpson and both players played a huge role in proceedings; McGregor taking two catches and scoring 17 runs and Joe Simpson excelled with his industrious fielding, tight bowling and steady batting.

The Tennis Club won the toss and elected to bat first and were restricted to just 25 runs off the first 7 overs thanks to tight bowling from Phizackerley and Gottesman with the latter taking the wickets of Warr and Newman in the process. Adam Selves then bowled out Vawdrey during his immaculate 4 over spell and Strudwick topped it off with an amazing 4 wicket haul for 24 runs. Smith, Van Niekerk (1 wicket) and Simpson then finished off the innings for the Hawks with some steady bowling restricting the visitors to 114 runs for 9 wickets.

The Tennis Club captain Jack Trimmer scored 41 of those runs but he could have easily gone several times including a dropped catch from Smitih (50p fine).Tom Phizackerley actually bowled the last over for the Hawks and took the wicket of M. Troy but then got hit in the face with the very last ball which produced a nasty bump around his eye socket - he eventually went to A&E later in the evening but was luckily given the all clear. Let's hope he's back playing soon as the Hawks haven't lost a game this season when Tommy P has been on the teamsheet.

Gottesman and Burt opened up for the Hawks and Big Ben was soon on his way back to the pavillion after smashing 35 runs in just six overs, Burt was unfortunatley bowled out by Potter for a duck with a bimbler which seemed to just brush the stumps although none of the onlookers seemed to notice and the Tennis Club celebrations were silent - maybe the wind had played a part in dislodging the bails?

Both teams retired to the Barleycorn for food and beverages and discovered a bottle of Pod's famous Chichester Harbour gin taking pride of place on the bar. Clark and Smith got through a few fair measures of the potent stuff while playing the Landlord and his friend at pool and somehow managed to stagger home.

Man of the Match: Joe Simpson (top all round performance from the youngster)