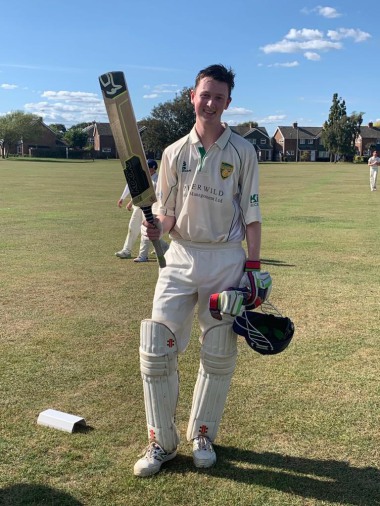 Tom Phizackerley: Carried his bat to a personal best 164 runs

Bognor won the toss and opted to field first

Tom Phizackerley produced the batting performance of his life after carrying his bat to a personal best of 164 runs as the Hawks inflicted a heavy defeat on Bognor CC at West Meads.

Bognor captain John Hooker won the toss and put the visitors into bat first and little did anyone know at that stage that the Hawks opener Phizackerley would be still there at the end of the 40 over innings. Fellow opener Jason Burt (5) was bowled out in the 4th over by Christian Elliott on an unpredictable strip but Hawks number 3 Will Parker built up a useful 88 run partnership with Tom before he was caught by Hooker / bowled Ashmore when on 30 runs in the 15th over.

Van Niekerk came in next and adopted his usual "gung-ho" approach securing 4 neat boundaries before being bowled by Ashmore for 17 runs several overs later. Skipper Davey (2) was unlucky to be caught behind by Forster / bowled by Ashmore for his third wicket and O'Donohoe (12) played some decent shots before he was caught out by Anesto / bowled Teasdale.

Vinnie Smith (33*) came in at number 7 for the Hawks in the 24th over to assist Phizackerley and the two players managed to see out the innings together with a tidy 124 run partnership. Phizackerley walked off the pitch to a well-earned standing ovation from the Hawks players and then both teams tucked into a delightful tea.

Parker and Maynard opened up the bowling for the Hawks with the latter getting the breakthrough in just the 2nd over thanks to Phizackerley catching Ashmore at mid-wicket. Parker eventually got a double himself bowling out Ramaknshna (22) and Paris (5) before the end of his allotted 8 overs.

The home side, which featured several promising youngsters, were struggling to find runs thanks to some tidy bowling from the Hawks attack including that of Matt Hill who got a well-deserved wicket when bowling out Teasdale (2). Pine from the other end only conceded 9 runs from his 6 overs including 2 maidens but didn't get the wicket he deserved (no sensational wicket celebration to be seen this week).

Skipper Davey was also bowling very tight lines and ended up with unbelievable bowling figures of 8 overs, 5 maidens, 1 wicket (that of Christian Elliott) and all for just 5 runs conceded. Davey then unleashed O'Donohoe for a rare bowling outing and he wasn't disappointed as the Gin King bowled out Hooker (2) and Saunders (0) for just 8 runs conceded from his 3 overs - simply lovely!

Josh Cooper was then run out by Clarky Sharky trying to take an unlikely second run - something which caused a heated debate with the Bognor scorer post match - many thanks as always to Claire Burt for doing a sterling job with the Hawks scorebook and staying calm.

It was left for the Hawks final batting partnership of Smith and Phizackerley to clean up the wickets - Smith took down Marcus (caught Parker) during his 3 maiden over spell and fittingly the hero of the hour Tom took the final wicket of the match after bowling and catching Forster.

This was the Hawks biggest ever score and margin of victory and somewhat made up for a similar heavy defeat at Bognor the previous season but, as always, the game was played in great spirits and Bognor skipper John "Mush" Hooker can certainly be proud of the way his youngsters handled themselves.  Bognor will soon forget about the result but this is one match that Tom Phizackerley will remember for a longtime!!

The Hawks play their final game of the season on Thursday night against Bosham in the Chichester Harbour Gin Trophy - the match is a dead rubber as Racqueteers can't be caught but pride will certainly be at stake.

Hawks Man of the Match: Tom Phizackerley (carried his bat to a pb 164, took two catches and one wicket - LEGEND!) 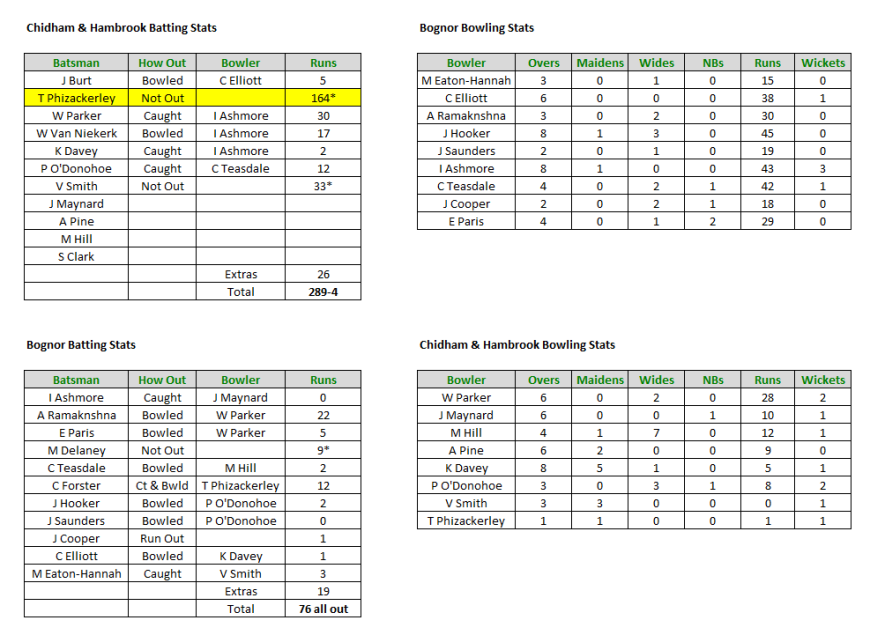