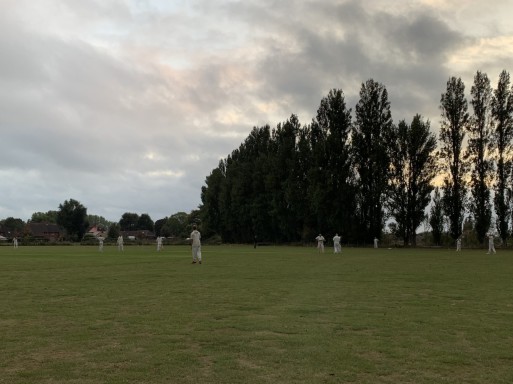 Darkness looms over the Bosham pitch as Hawks bat

Bosham won the toss and opted to bat first

Chidham & Hambrook suffered a heavy defeat against a strong Bosham side in the last game of the Chichester Harbour Gin Trophy on Thursday night, but still managed to cling onto second place in the tri-series tournament thanks to a better net run rate.

The match was effectively a dead rubber as Racqueteers had already won the competition but local pride was still at stake and Bosham got the upper hand early on by winning the toss and choosing to bat first.

The Chidham opening bowlers of Maynard and Dungar kept the score low in the first few overs but Bosham were soon up and running and it wasn't long before Kezza (25) and Jack Hardman (26) were both forced to retire. Jez (12) was run out after good work from Phizackerley and the same player got Gyles (8) LBW. Ben Gottesman got the wickets of James (11) and Max (1) - both bowled but Matt (21), Andy (8) and Kel (10) got some late runs for Bosham to leave them on an impressive 142-5.

Phizackerley and Maynard opened for the Hawks in ever darkening conditions and the latter was soon gone for 0 after an LBW shout from Pine, closely followed by extreme celebrations from the Bosham player. Phiz (8) was bowled out by Jack and A Wild (3), P Wild (0) and skipper Davey (0) were also victims of Pine the Wine - Gottesman managed to reach 18 runs before being bowled out by Matt and Smith (3) had his wicket taken by Pablo the spinner.

But for Chidham the game was all about net run rate and Dungar (13) and Burt (15) performed late heroics to get the Hawks over the line to clinch second place in the CHG trophy virtue of a 0.95 better run rate.

Racqueeters will collect the CHG winners prize on Saturday afternoon at Bosham and C Danby (top batsman) and A Jameson (top bowler) will also get their awards.

Another excellent season for the Hawks which saw them play 23 matches with 14 wins, 1 draw and 8 defeats with perhaps the victory at Bognor last Sunday being the most memorable, especially for Phizackerley.

There is the small matter of the Chidbrook Cup on Sunday when the villagers of Hambrook and Chidham come together to do battle - Hambrook are the current holders and have won the last 5 renewals. The match starts at 2pm in Bosham and all local families are welcome to attend and support their village. 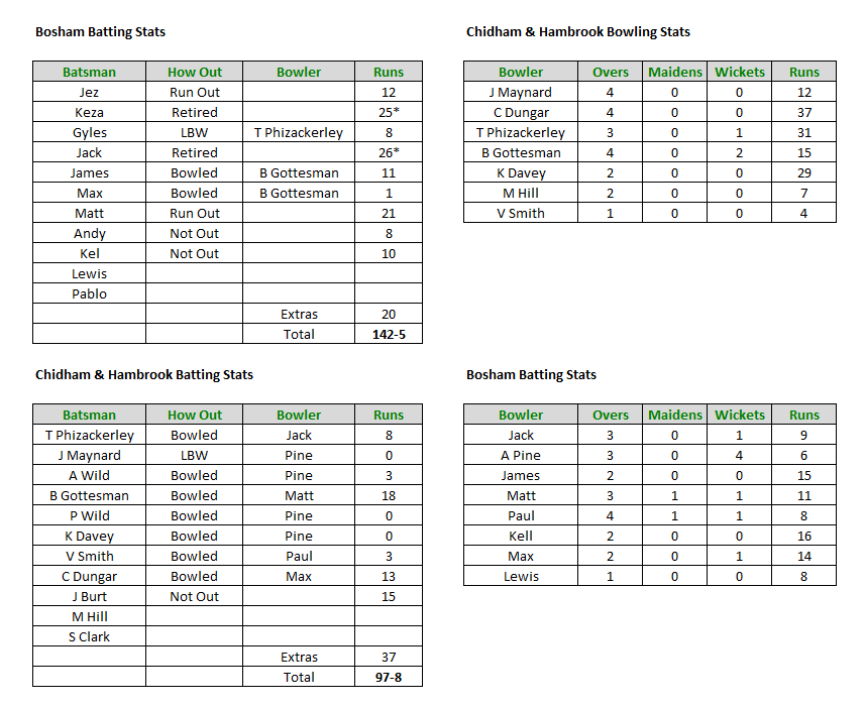