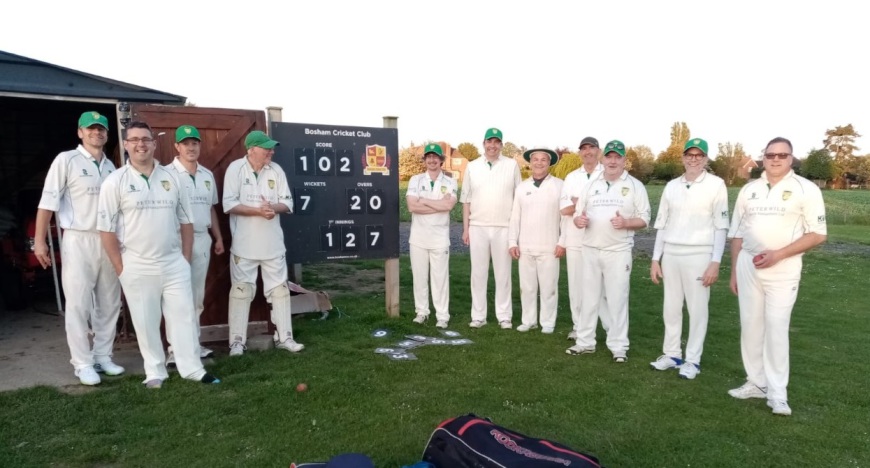 Hawks winning side against Lou's Casuals

Chidham & Hambrook recorded their first midweek victory of the season against a depleted Lou's Casuals side and dedicated their win to Keith Davey's step-mum Sally, who sadly passed away during the week.

John Strudwick stepped up to the role of skipper for the night in the absence of Keith and duly lost the toss with Hawks being forced to bat first. Worse was to follow for the acting captain as he was soon caught out to a Matt W ball when on just two runs. Following a slow start fellow opener Van Niekerk and number three Gottesman soon got the scoreboard ticking along and when Big Ben realised he had amassed 25 runs early in the 11th over he lashed out to record 42 runs before retirement. Van Niekerk wasn't far behind with a good knock of 29 runs and Peterson also reached the retirement target but was bowled out by Tom before the end of the over on 28 runs. Hawks soon found the runs hard to come by and Smith (2) went out to a Daron pea-roller, Pine was bowled for a golden duck by the same bowler and Scully-Horner was also a victim of Daron, caught for one run. Maynard (1) was bowled by Nick, Hill was caught out for a duck to a Tom ball leaving A Clark (5*) and S Clark (0*) at the wicket with Hawks recording 127-7 from their 20 overs.

Casuals were without four key players and also had as many players carrying various injuries in their line-up so the chase was always going to be tough. Gottesman took the early wickets of Dan (4) and Paul Boyle (1) but the visitors soon found their stride and at the half way stage they were bang on the required run rate. Clarky Jnr took the big scalp of Tom (12) to ease concerns but Simon II (27) reached retirement and the Casuals number two Robbie survived the whole 20 overs (28*). However, the tail enders found runs hard to come by thanks to some tidy bowling from Peterson (2-0-1-3) and Matt Hill (3-0-3-12) who took a splendid three wicket haul, leaving Lou's Casuals 26 runs short of their target.

Both teams returned to the Barleycorn following the match to tuck into some turkey curry and Steve Clark presented John Strudwick with a cigarette card of his Great Grandfather Herbert Strudwick who had played for Surrey and England in the early 1900s. A glass was also raised to the memory of Sally who had watched the Hawks play on several occasions, R.I.P.

Hawks Man of the Match: Ben Gottesman (2 wickets and 42 runs not out), Matt Hill was a close second with his 3 wicket haul. 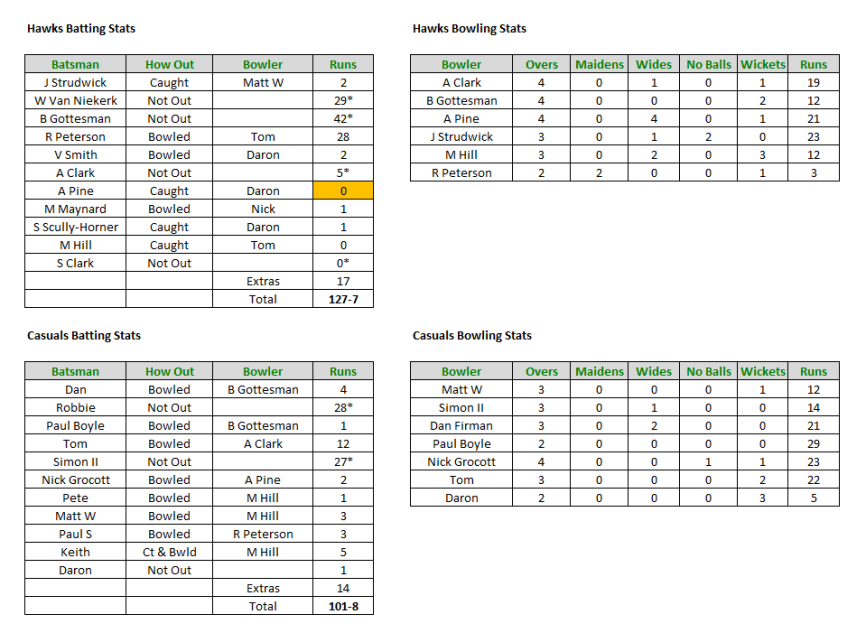