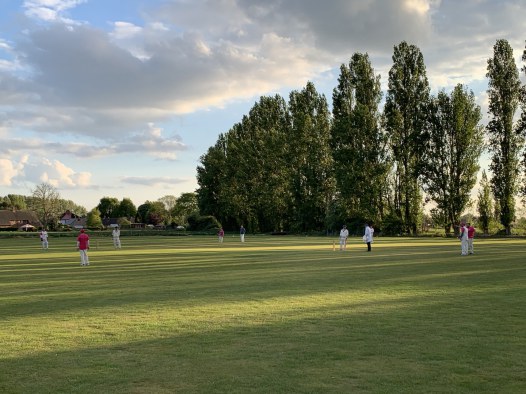 Wild (left) & Richardson at the crease

A superb 43 not out from Andy Wild helped Chidham & Hambrook to a 5 wicket victory over Milburys in a reduced over match at Bosham on Thursday night.

Hawks won the toss and elected to field first with Johnny Maynard producing a top notch performance - taking 2 wickets for just 12 runs in his 4 overs as well as 2 catches. Bosham stalwarts Tom Badger and Dave Richardson took a wicket a piece and a late run out left Milburys on 109-5 off their 18 overs.

Rory and Johnny opened for the Hawks and young Maynard, having faired so well with the ball, was unlucky to be run out in the first over. Andy Wild joined Peterson at the crease and the pair were cruising along nicely until Rory was caught mid wicket on 23 runs. Dave Richardson (12) and O'Donohoe (21 runs including a massive six for the Gin King) assisted Wild on his way to an outstanding 43 runs unbeaten. It was left for newcomer big Phil Brindley to smash the winning runs with 11 balls to spare, thus maintaining the Hawks unbeaten start to the season.