Hawks No Match for Coach & Horses

Coach & Horses won the toss and opted to field first

Chidham & Hambrook's recent poor form continued with the Coach & Horses being the latest team to inflict a heavy defeat on the Hawks.

The homeside were put into bat and Van Niekerk suffered another golden duck with Buttler's first ball in the second over. Gottesman and T. Phizackerly put up a good show before the same bowler took their wickets - Phizackerley bowled on 5 runs and Gottesman caught on 13. Hawks number 4 Vinnie was also caught on 7 runs but Pete Wild produced the Hawks best score of the day reaching 22 runs before being caught from a Turner ball.

Andy Clark hit a nice boundary but was subsequently bowled out by G Turner for 5 runs and then stand in skipper J Strudwick was another duck victim this time at the hands of Gavin. Andy Wild (11) reached double figures before being bowled by the consummate all rounder Greg Turner - Keynes and Rawlinson added some late runs to leave the Hawks on a below average 105-9.

The visitors started off slowly thanks to some tight bowling from Andy Clark and Ben Gottesman and after six overs they had only reach 24 runs but crucially without the loss of a wicket. That breakthrough was to come in the next over after a strong LBW appeal from Strudwick was upheld by the umpire even though there was a distinct sound from Buttler's bat. Keynes then took down Stillwell (19) in the same manner and then doubled up with the key wicket of J Turner (12). Strudwick then got another two wickets when bowling out S Connor (4) and F Still (0) and with the Coach & Horses on 43-5 after ten over the Hawks sniffed victory.

But Maloy and Ramsay had other ideas and after a defensive start both players started hitting the boundaries. Strudwick probably wished he had just bowled the 3 overs after being hit for 12 runs on his last and T Phizackerley has had better days after the Coach & Horses secured victory with 18 runs from his first 4 balls. The visitors didn't even need to call upon the batting services of Greg Turner! 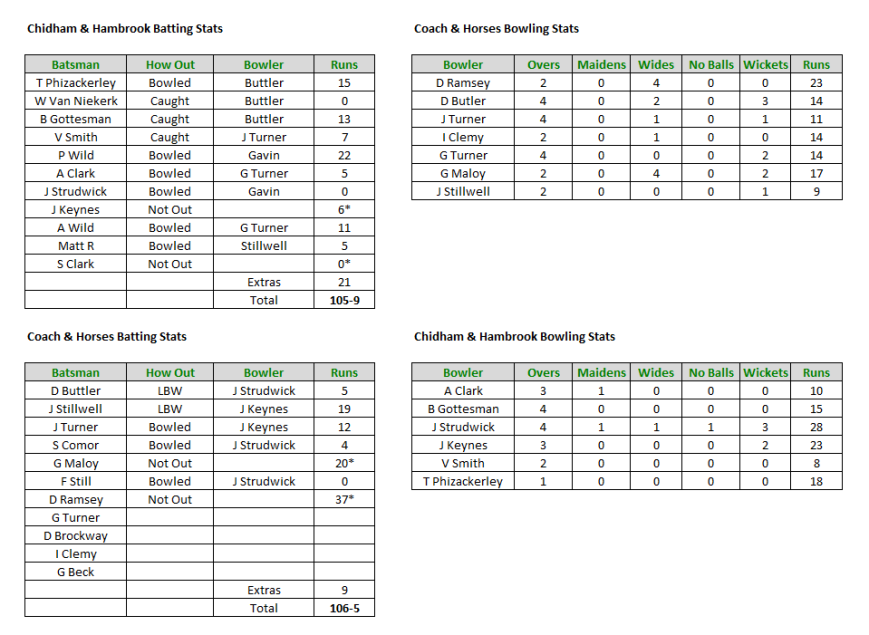