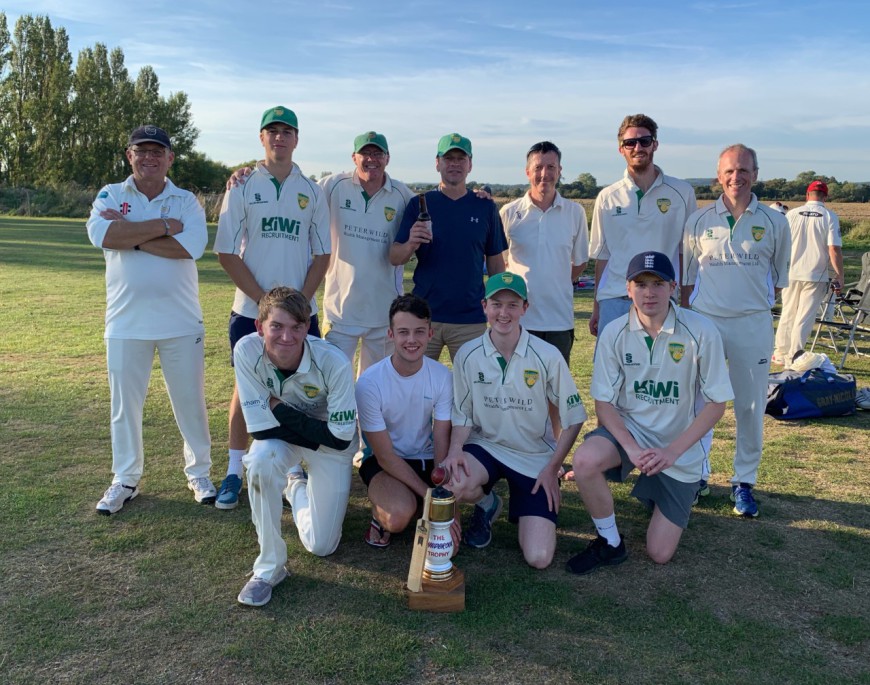 Hambrook won the toss and opted to field first

Hambrook retained the Chidbrook Trophy on Sunday afternoon for the sixth consecutive year after a dramatic late victory against local rivals Chidham.

WIth Hambrook requiring just 5 runs to win from the last 4 overs, Chidham started piling on the pressure as Clark, Davey and Peterson all bowled maidens and Peterson additionally took the wicket of A Wild for a duck, leaving Hambrook batsmen J Loveday and T WIld still needing 5 runs from the last over. Loveday then hit two fours from the first three balls to secure a 5 wicket victory for Hambrook with just 3 balls to come.

The players fuelled up on Pod's pre-match gin cocktail before Chidham skipper Davey lost the toss and were forced to bat first with openers Peterson and Burt looking good for 25 runs a piece. Joe Phizackerley had other ideas though and bowled out Burt for 3 runs and then J Loveday got the huge scap of Peterson (14) thanks to an amazing catch from J Maynard. Davey and his nephew Joel got things back on track for Chidham with the latter retiring on 27 runs and the skipper making 19 runs before being caught out from a David Phizackerley ball.

O'DOnohoe (3) and Wild (7) were then caught out from A Wild and S Parker balls respectively and J Strudwick (4) was expertly stumped out by wicket-keeper S Clark closely followed by A Clark (3) being run out. A Pine (14) and M Rawlinson (6) added some much needed late runs to leave the challengers on 142-7 from their 25 overs.

Both sets of players and their families enjoyed a sumptious tea in the glorious Bosham sunshine and then play resumed as Hambrook looked to chase down the 143 runs required for victory. Youngsters J Maynard and W Parker opened the batting and the latter was unfortunately run out when on 14 runs but Maynard managed to get back in the clubhouse with 27 runs not out.

Hambrook skipper T Phizackerley (10) was then bowled out by Strudwick before J Mansell got the wicket of V Smith (4) thanks to an amazing catch from Peterson despite the sun being in his eyes. Peterson then took the wickets of J Phizackerley (11) and A Wild (0) during the dramatic last 4 overs before Loveday got the reigning champions over the line.

Chidham & Hambrook CC Chairman Jason Burt gave a post-match speech before the landlady of the Barleycorn, Kelly, handed over the Chidbrook cup to Tom Phizackerley, his fourth victory as captain. This was Hambrook's 10th win in the competition since it's inception in 2006 and Chidham will be looking to gain revenge next season in the 15th Chidbrook Cup.

Man of the Match: Rory Peterson (14 runs, 2 wickets and 1 maiden for 9 runs, an amazing run out and a dramatic catch in the sun) 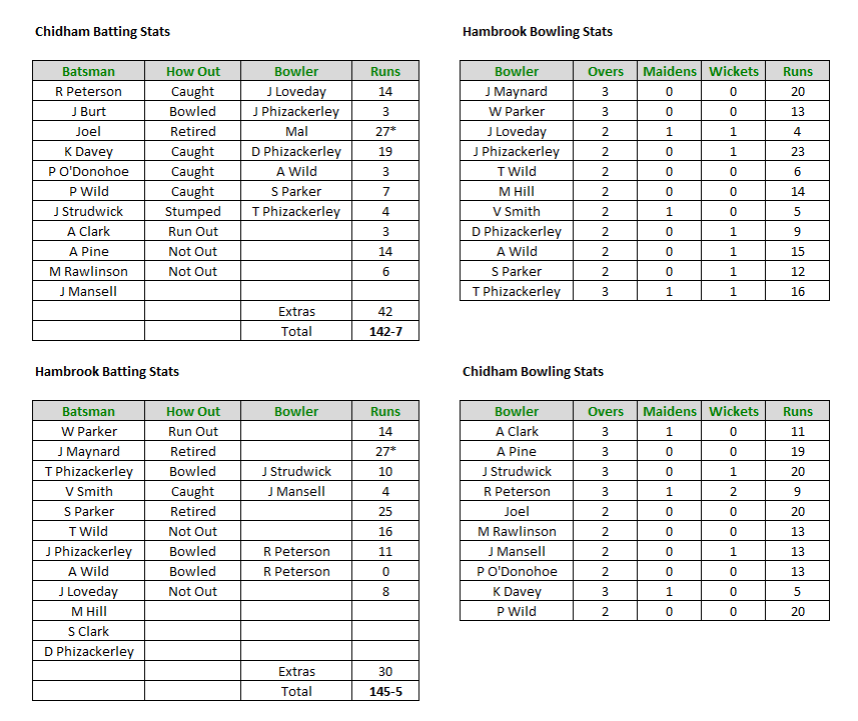