Chidham won the toss and elected to bowl

A series of dropped catches proved costly as Chidham & Hambrook lost to the Izaak Lions at a tranquil but chilly East Meon on Thursday evening.

Chidham welcomed back WIllem Van Niekerk who passed a late fitness test following his recovery from a broken arm (self-certified) but lost Jon Keynes just before the game with a back injury and local man Dave stepped in to help the Hawks. The home side play traditional pub rules; bowl two overs each, no LBWs, can't be out first ball, retire at 25 etc. and this set the scene for an exciting spectacle with all players able to contribute to the action.

Captain Pink won the toss and elected to bowl first but the Hawks were soon on the back foot as Smith and Van Niekerk's opening four overs were smashed for 40 runs. Dungar and Strudders steadied the ship taking a wicket a piece for the next 33 runs and then Pink and Davey both bowled well to keep the home score within reach. However a series of dropped catches around the contours of the outfield and excellent batting by the home side resulted in a massive chase target of 187 for the win.

Chidham came out fighting and Dungar, Davey, Van Niekerk and O'Donohue all reached their retirement targets with consummate ease but alas this wasn't enough with the tail enders unable to score the numerous boundaries required to take the victory - a final total of 135 would be enough to win many a 20 over match but it wasn't to be on this occasion.

This was Chidham's first trip to the Hampshire village of East Meon but everyone was impressed with their opponents set up and look forward to hosting the Lions at Bosham in August.

Man of the Match: Clive Dungar 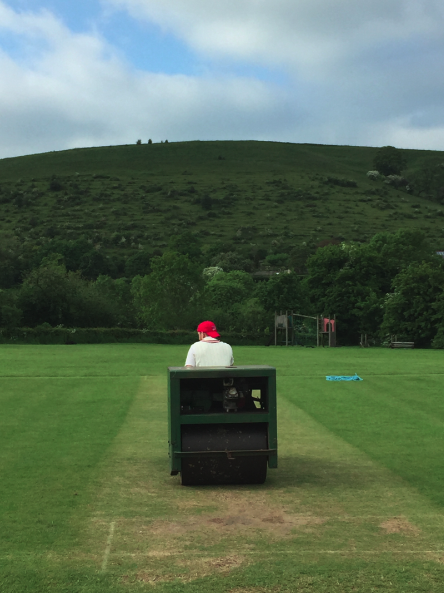 An Izaak Lion prepares the wicket at East Meon