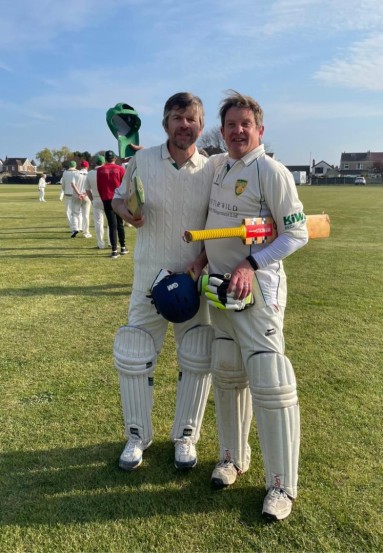 Smith and O'Donohoe carried the Hawks over the line

It took ten matches for the Hawks to record their first win of the 2020 campaign and that had come in the very final game at home to Gosport Borough - but this season has got off to a "Rorying" start after a comfortable victory away to the same opponents.

The Hawks made five changes to the line-up which won the corresponding fixture at Bosham last September with Maynard, Pine, Hill, debutant Stuart Turner and Scully-Horner replacing Ajit, Burt, Wild, Phizackerley and Rawlinson who were all unavailable.

First teamer Denzel James opened the batting for Gosport and his experience soon told as he rattled off ten boundaries on his way to 59 runs and retirement. Fellow opener Taylor was run out on 22 runs and skipper Davey took the wickets of Brown (13) and Todd (2) with some tidy bowling before Butcher retired on 43 runs. The Hawks were in debt to the 'tin of sin' due to numerous misfields in the innings but O'Donohoe took the wicket of Gravells (4) thanks to a sublime catch from Maynard on the boundary. Some late runs from Royle and Boswell left the home side on a respectable 197 runs from their 35 overs.

Peterson and Maynard opened for the Hawks and it only took 9 overs for the mercurial Peterson to reach 70 runs and retirement - he smashed six boundaries in his final over alone, sending the patrons of Privett Park and the adjacent Gosport Borough FC stadium scampering for cover. Maynard (52) also retired after an excellent knock and Davey (16) was ticking along nicely until being caught out by Boswell. It was left for Smith (8) and O'Donohoe (25) to take the Hawks over the line - the 'Gin King' scoring the winning runs with some nine overs to spare.

Probably one of the Hawk's finest Sunday outings with Peterson producing one of the most ferocious batting performances ever seen in a Chidham shirt. A great start to the season and also nice to see a new Hawk in the nest - Stuart Turner who played his part with some great fielding.

Man of the Match: Rory Peterson (outstanding display of batting)