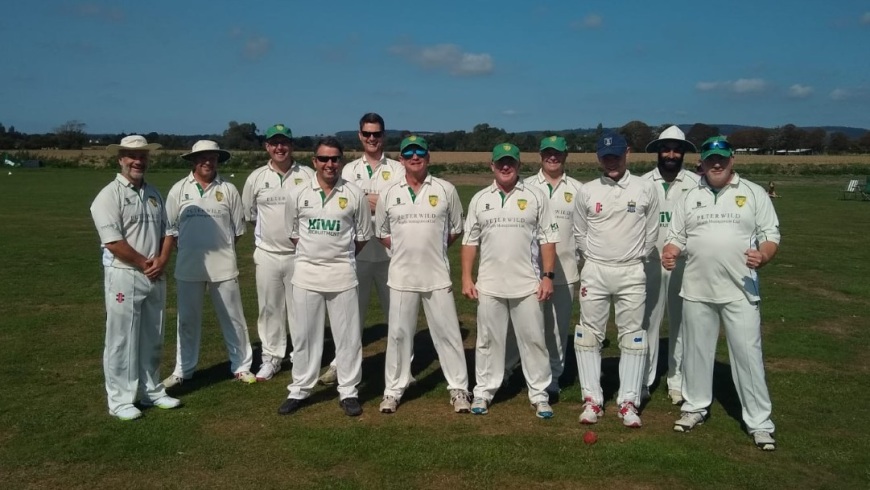 And so it came to pass - after seven years of frustration, Chidham finally regained the Chidbrook Cup with a comfortable seven wicket victory over Hambrook at Bosham on Sunday.

Chidham skipper Keith Davey left no stone unturned in his quest for Chidbrook Cup success and enlisted the sevices of league players Joel Lane and Ajit Sambhi to boost his team's chances. Hambrook on the other hand had to make do without Will Parker, Steve Parker and Tom Wild from the team which won by the narrowest of margins in 2019.

Hambrook lost the toss and were put into bat first with the dynamic duo of Tom Phizackerely and Johnny Maynard opening things up for the reigning champions - both players struggled to find the boundary thanks to some neat fielding from Chidham but they eventually reached forced retirement with Tom making 31 runs and Johnny 26 runs. Number 3 Vinnie Smith (6 runs) was soon gone when misjudging a Pete Wild slow looping straight ball and Van Niekerk hit a solid 19 runs before Strudwick's appeal for LBW was upheld by match umpire Clive Dungar. Andy Wild (2) was soon gone after being bowled by the sublime Ajit and the same Chidham player caught and bowled James Loveday (18) who was having a great knock with the bat at the time. Joe Phizackerley (1) was quickly bowled out by skipper Davey and tail enders Hill and Scully-Horner scored 2 runs a piece to leave Hambrook on 147-5 off their 25 overs, two runs more than their winning score in 2019.

After a sanitising session, the players and socially distanced crowd enjoyed snacks from their own lunchboxes in the glorious September sunshine and were thankful that the match was being played on the Sunday rather than the day after when strict Covid gudielines came back into effect.

Peterson and Burt (6) opened for Chidham and the latter was soon out LBW to a Loveday ball. Matt Chesshire, having his first game for 3 years, came in at number 3 and rolled back the years with a fine knock of 18 runs before being bowled out by Tom Phizacekerley. Peterson (34) swiftly reached forced retirement and when work partners Davey (32) and Sambhi (28) also reached retirement with the greatest of ease, the writing was very much on the wall for Hambrook. Paul O'Donohoe made 11 runs before being caught out from a Scully-Horner ball and it was left for Pete Wild (6) to secure the winning runs with 7 wickets and 5 overs remaining.

Following the match, CHCC Chairman and Chidham player Jason Burt presented the Chidbrook Cup to skipper Keith Davey who gleefully held the trophy aloft for the first time since 2013, with his team chanting in the background "It's coming home, it's coming home!"

The majority of players headed back to the Barleycorn to congratulate / comisserate each other but Hambrook had the last laugh when Steve Clark made it 1-1 on the day by beating skipper Davey at a game of conkers in the pub garden.

Man of the Match: Ajit Sambhi (exceptional batting, bowling and fielding skills on the day) 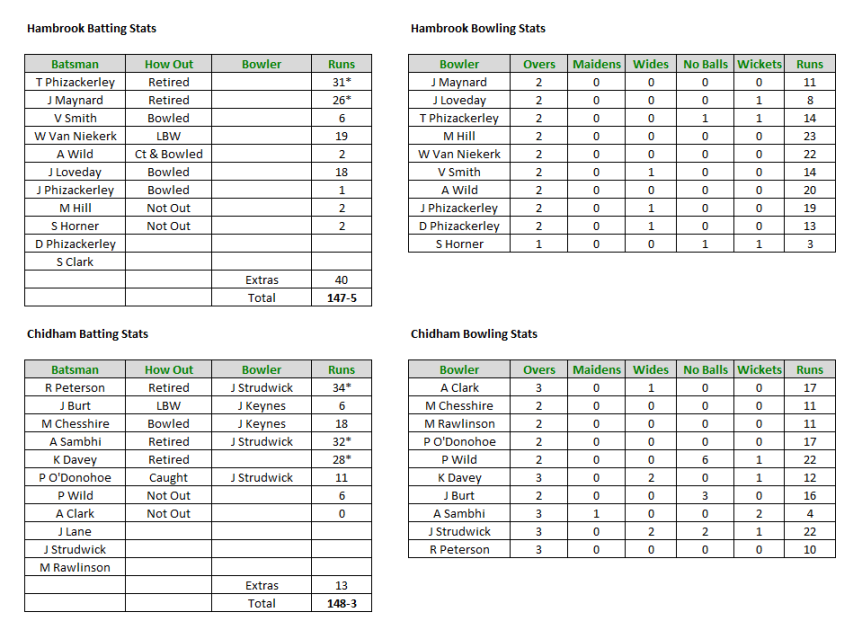