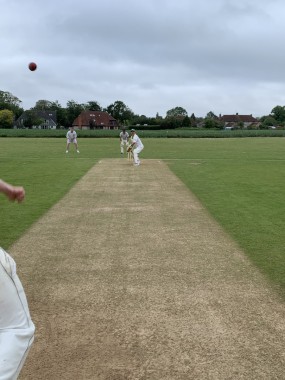 Chidham & Hambrook turned in a "tip top" performance on Thursday night as they crushed the Coach & Horses by 41 runs.

The Hawks won the toss and opted to bat first but skipper Davey was soon caught out for a duck - fellow opener Selves stayed firm though and eventually retired on 27 runs along with Van Niekerk (25) who took one in the crown jewels for his efforts. Number 3 Gottesman was caught out on 15 runs and O'Donohoe was ticking along nicely until being bowled by the visitors bowling ace Tip Top for 16 runs. Greg was also turning the ball beautifully in his 4 overs for the Coach & Horses but got no rewards and it was his brother who took two further wickets, Alex Crook for a golden duck playing in his first match for five years and Turner also for a duck. Some late runs from A. Clark (11) and Hill (2) left the Hawks on a vulnerable 115-5.

The Coach & Horses started off well but Andy Clark took the big scalp of Tip Top (14) in the fourth over thanks to a mercurial catch from O'Donohoe on the boundary. And then the wheels came off for the visitors with two quick run outs and two wickets for Van Niekerk leaving Gregg at number seven their only hope of a result. He was going OK on 11 runs but fell victim to the silent assassin Matt Hill who bowled him out in the tenth over. At this stage the game was over and it was just a matter of tying up loose ends, something which Adam Selves managed single-handedly, taking an impressive 4 wickets for just 3 runs in 13 balls (including a 2 wicket maiden over).

Hawks Man of the Match: ADAM SELVES (4 wickets for 3 runs in just two overs and 27 not out with the bat)