Aldwick won the toss and elected to bat

Chidham & Hambrook suffered a second defeat to Aldwick within 30 days on Thursday evening but gave their hosts a much closer run for their money on this occasion.

Stand in skipper Steve Clarke lost the toss and with several players running late due to traffic issues and J Keynes pulling out with a late injury, the Hawks were forced to take the field with just 7 players - the home side kindly offered three of their players to assist in the first few overs.

The brothers Phizackerley opened the Hawks attack and both managed to grab a wicket a piece for a sensible run rate and by the time they had finished their 3 overs, the remaining Hawks players of Davey, O'Donohue and Dungar, having spent thirty odd minutes touring the neighbourhood, joined the party.

Olly Keynes and Andy Clark were unable to add to the wicket haul from their two overs and with Gibbs and Sargeant retiring on 25 runs for the home side and Wilson hitting 24 the signs looked ominous.

However, Dungar bowled well taking another wicket, Olly Keynes hit the stumps with a tremendous 30 yard throw to run out Rosser and Smith and Davey helped keep the score down leaving Aldwick on 133-4 from their 16 overs (restricted due to late start and fading light).

The ever reliable Matt Chesshire, who had performed exceptionally well behind the stumps, opened the batting and was soon on his way to retirement (26 runs) but his batting partners of Dungar (7), O'Donohue (4) and Smith (7) who were caught, bowled and run out respectively were unable to provide much assistance with the bat.

Skipper Keith Davey and Tom Phizackerley then entered into a brilliant partnership with Davey smacking the ball around neatly for 28 runs and forced retirement and Tom Fizz reaching 22 before being bowled by Smith - the Hawks by this stage were 22 runs short of victory with 4 overs remaining.

But the runs dried up towards the end and the Hawks' tail-enders were unable to reach the winning target eventually falling 12 runs short in this fun Thursday evening fixture - needless to say high jinks ensued at the Barleycorn afterwards!

Man of the Match: Matt Chesshire 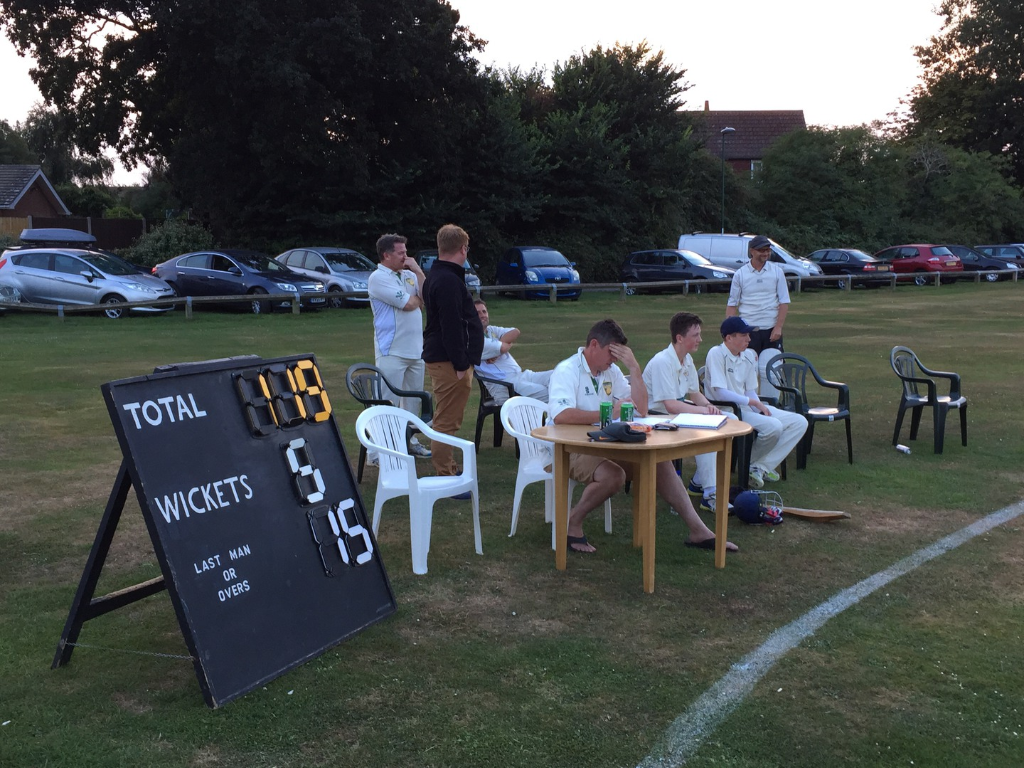