Emsworth won the toss and elected to bat

An inspirational 81 not out by the returning Matt 'Cat' Chesshire was not enough as Chidham slipped to their 5th consecutive defeat at Emsworth on Wednesday evening.

Chidham made several changes to team that lost at Izaak Lions last week with Matt Chesshire coming in for his first game of the season along with Joe Phizackerley and Tom Diver - Jon Whitewood and Andy Clark returned having missed the Izaak Lions game. Stand in skipper Keith Davey lost the toss and Chidham were forced to field first without Chesshire for the first 5 overs who was stuck at work.

Opening bowlers Dungar and Van Niekerk ran a tight ship, conceding 50 runs off the first 8 overs for no wickets and with the team back to full strength in the outfield the breakthrough came when Andy Clark took his first wicket for the club with Pailin being bowled for 16. Clark followed this up in his second over with a wicket maiden, Chapman being caught behind by wicket keeper Steve Clark for 12 runs. However, these were the only two wickets for Chidham (dropped catches proved a problem once again) and with Mason gracefully retiring on 50, it was left for Fountain (38) and Smith (26) to take the home side's total to 154 runs.

Matt Chesshire and Willem Van Niekerk opened for the Hawks and both players were quickly off the mark and raced forward to 27 runs off the first 3 overs with the victory looking a distinct possibility. Van Niekerk, who scored 45 for the Bosham 1st XI on Saturday, reached a very respectable 25 which would normally see him retire in this type of game (home side stated there would be no retirements) before he was bowled out by Johnson. Andy Wild added a further 9 runs before his wicket was taken by the same bowler and then the next few Chidham batsmen were all taken for a few runs each.

Meanwhile Matt Chesshire was still hitting the ball well scoring 10 boundaries in total (one six) on his way to a remarkable 81 not out, but he was unable to find a batting partner to assist in the chase and the Hawks eventually finished 18 runs short.

The Hawks went to the Coal Exchange in Emsworth after the match to drown their sorrows and perhaps the one person who deserved the laid on supper the most was the Cat himself but unfortunately he left the pub a minute before the food was served.

Chidham hope to return to winning ways on Sunday when they visit Bedales school in Petersfield for a 40 over match - another big change to the team looks likely with only Smith, Dungar, Davey, Diver, Phizakerley and Whitewood available from the Emsworth match.

Man of the Match: Matt Chesshire 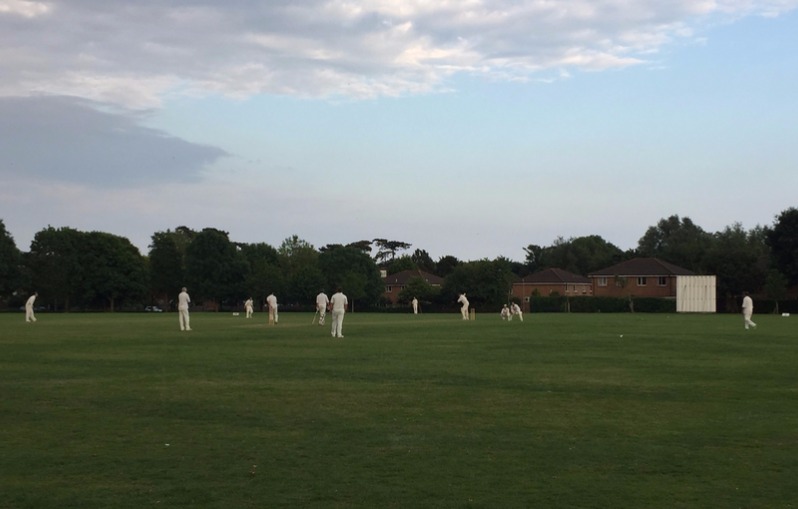