Izaak Lions won the toss and opted to bat first

Hawks made it two away wins in consecutive season against Izaak Lions after a comprehensive 8 wicket victory at East Meon on Thursday evening.

The home side had 13 players turn up for the match so the Hawks agreed to take one of the Lions players and have 12-a-side match so as to give everyone a game - Richard Ath. was the player given to the Hawks which was probably regretted by the Lions as he took one wicket for just 8 runs in his two overs.

Maynard, A Clark and O'Donohoe took a wicket a piece and Sharky also got on the scoresheet thanks to an amazing one handed boundary catch from Pistol Pete. Skipper Davey joined the band of merry bowlers with his own wicket thanks to a catch from none other than the Shark himself. Ollie (29*) and Dodsie (26*) managed to get back in the den for the Lions but there was little resistance elsewhere and the home side finished on 124-6.

Tommy Phiz Bang (29*) and Maynard (26*) opened for the Hawks and both players were soon back relaxing in the clubhouse after scoring almost half of the runs required. Andy WIld (13) and Davey (20) were also on their way to forced retirement before both being run out (the old legs causing a few issues), so the stage was left for the consummate duo of O'Donohoe (10*) and Pistol Pete (21*) to get the Hawks across the finish line with 8 wickets and 12 balls to spare. Hooray for the Hawks!

Chidham travel to Bognor (West Meads) for a 1pm start on Sunday.

Hawks Man of the Match: Johhny Maynard (26 not out and a wicket) 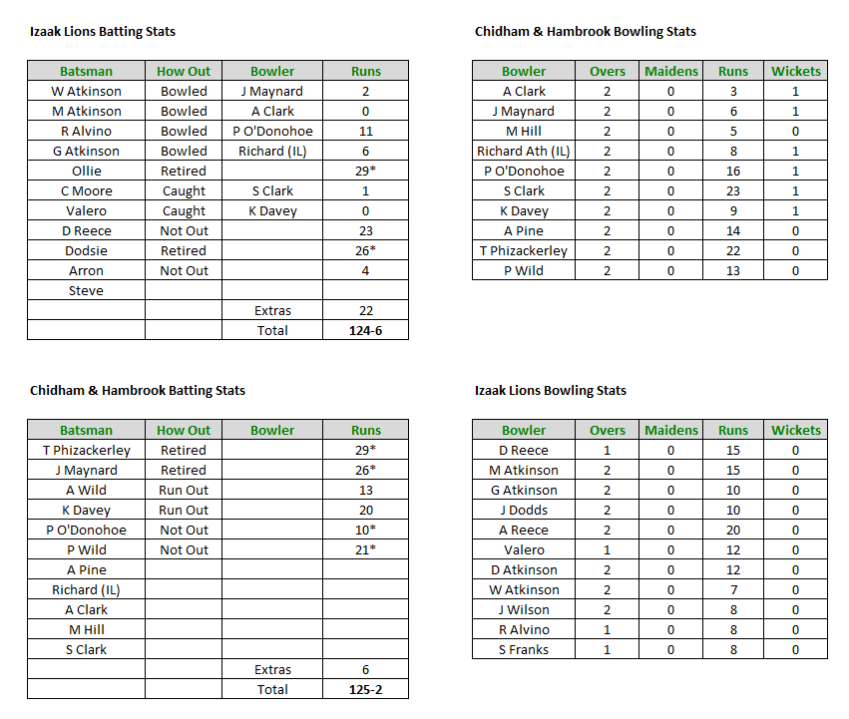