Hambrook made it five Chidbrook Cup wins on the bounce after a five-wicket victory in one of the most competitive renewals the trophy has ever seen.

Following several weeks of social media banter, both captains turned to their big guns to try and secure victory with Phizackerley calling upon the services of Kezza and Dave McClean for Hambrook and Davey turning to Ben Gottesman, Rory Peterson and Matt Chesshire for Chidham. As it was Peterson almost single-handedly won Chidham's first trophy since 2013 by scoring 73 runs not out, taking 2 wickets (including a wicket maiden over) and 2 catches but that wasn't to prove enough.

Both sets of players tucked into Pod's delicious Chichester Harbour gin cocktail before the match which helped ease the tense atmosphere and then skippers Keith and Tom carried out the pre-match toss-up at the Bell End of the wicket. Davey won and elected to have his Chidham team bat first.

Peterson opened and was soon on his way back to the clubhouse with six quick boundaries and there were plenty more to follow later in the innings - it looked like a dropped catch on the boundary by Van Niekerk could prove costly. Fellow opener Burt was soon gone for 4 runs in one of the most bizarre caught & bowled wickets ever seen - Van Niekerk bowling, parrying his attempted catch onto batsman Chesshire stood next to him, it then bounced several times on Chesshire before Willem eventually secured the ball in his hands!

Matt Chesshire was ticking along nicely but then got caught behind by Steve Clark from a Kezza bowl when on 14 runs and then Willem took the notable scalp of Ben Gottesman (8 runs) with an excellent bowl. Hambrook then started to eat their way through the rest of Chidham batting order; Walmsley bowling out Wild (1), Vinnie bowling out O'Donohoe (7), D Phizackerley taking the wicket of Davey (0) and Andy Gury being run out. Then Dave McLean bowled out Andy Clark and Matt Rawlinson for ducks which left Chidham on 116-9 with six overs left to play and only the wickets of Strudwick and the returning Peterson to go.

Strudwick and Peterson made a determined last stand though and saw out the remainder of the innings and their cause was helped by some dubious bowling and fielding by the Hambrook players. Peterson eventually reached a magnificent 73 runs not out - the highest ever in Chidbrook Cup history - and his foil Strudwick got to 7 runs.

During the interval players and supporting families tucked into the delicious tea spread, the highlights of which being Davey's amazing egg sandwiches (freshly laid eggs and fresh M&S bread) and Burt's delightful array of cakes, all washed down with a selection of beers and ciders from Van Niekerk's bar - a veritable feast all round!

Most players would have been happy to spend the rest of the glorious sunny afternoon drinking beer, eating food and chatting to friends but there was the small matter of another 25 overs cricket to play and Hambrook chasing the 175 runs needed for victory.

The reigning champions got off to the worst possible start though when opening bowler Petterson literally smashed Kezza's wicket with the 3rd ball of the innings. After some hasty repairs, play resumed and Will Parker and Hambrook number 3 Dave McClean soon got the upper hand on the Chidham bowlers.

Will Parker (18 runs) was eventually bowled out by Davey thanks to a Peterson catch but McClean soon got to 28 runs and forced retirement. Van Niekerk came in and quickly followed McClean back to the clubhouse after knocking a superb 27 runs and Phizackerley (14 runs) and Smith (17 runs) were on their way to retirement before being bowled by Chesshire and Gury respectively,

Steve Parker was the 3rd Hambrook batsmen to get back in the hutch after a mercurial batting display which saw him hit 27 runs but then Joe Phizackerley and Paul Walmsley both went cheaply on 5 runs, the first wicket taken by Strudwick (caught Gottesman) and second caught and bowled by Peterson.

The remaining Hambrook batsmen, David Phizackerley and Steve 'Legend' Clark, then needed to make 12 runs from the remaining 4 overs to seal victory for the Hawks with three retirees still waiting in the wings. A couple of boundaries by David then set up Steve Clark to score then winning runs with a superb boundary to make it five Chidbrook Cup wins on the bounce for the 'Brook'.

The trophy was then presented to winning captain Tom Phizackerley by the Barleycorn Landlady Kelly and the majority of players returned to her pub for a few beers, celebrating a magnificent cup day for the local community played in the true spirit of the game and capping a splendid season for Chidham & Hambrook Cricket Club.

All eyes are now focussed on the CHCC golf, awards and AGM day which takes place on Saturday 3rd November.

Man of the Match: Rory Peterson (73 not out, 2 wickets, 1 maiden and 2 catches, almost single-handedly took down Hambrook) 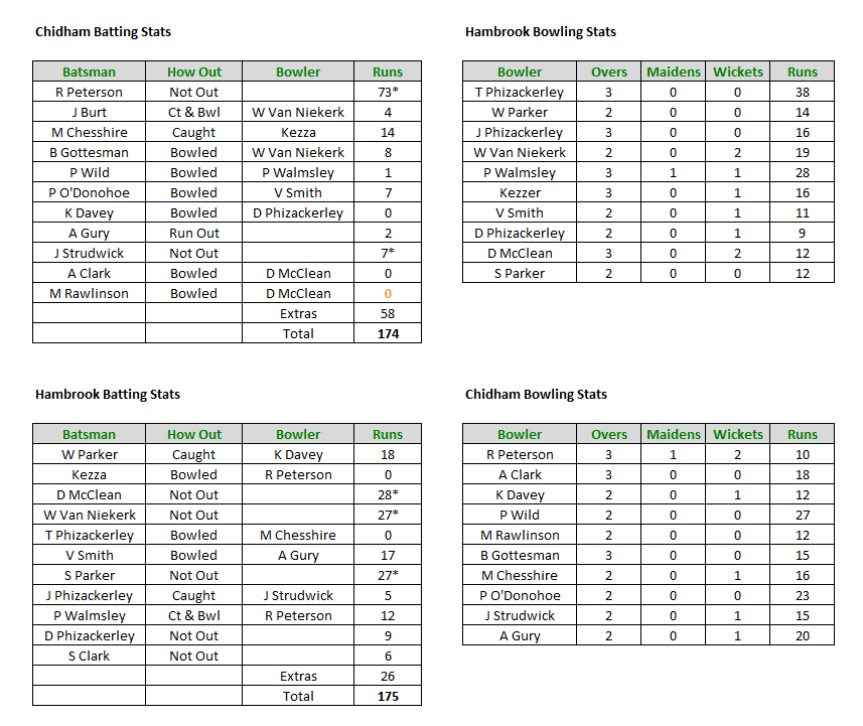