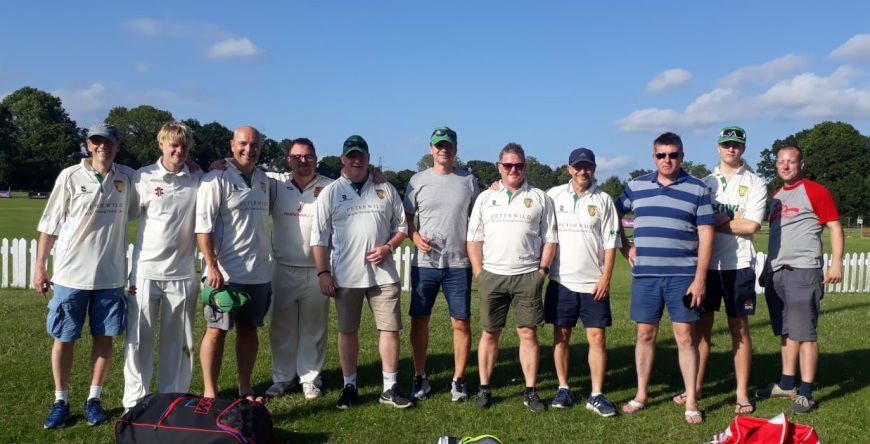 Billingshurst won the toss and opted to bat first

Chidham & Hambrook suffered their first defeat of the season against a young but highly skilled Billingshurst team at a sunny Jubilee Fields on Sunday afternoon.

The home side won the toss and opted to bat first with Wigundry and Gosling soon rattling off 40 runs between them before being taken down by Hawks bowler Clive Dungar (LBW and catch). Dungar soon got his third wicket when Thornley was dismissed on 18 runs and B Hoad, F Hoyard and C Hoyard weren't far behind after having their wickets taken by Broughton, Keynes and newcomer Andy Pine. However the experienced Osborne soon got the home side's inning back on track - rattling off 64 runs using every shot in the book before the captain's orders to lose his own wicket. The young tailenders added some extra runs before a double wicket haul for Keynes and a late wicket for Smith left Billingshurst on a strong total of 217 runs (36 overs).

Chidham openers Pine and Parker, who had played well behind the stumps, got off to an excellent start and the Hawks had already reached 43 runs without loss by the end of the fifth over. Things then took a dramatic twist as Andy Pine was given out LBW even though the ball definitely hit his bat first and the Hawks number 3 Pete Wild was caught out for a golden duck. Number 4 Smith soon followed with no runs for his brief effort before Davey took control for a while with 15 runs before being bowled by O. Hoad. Parker was eventually caught out on an impressive 44 runs which left Hawks little ammunition at the tail end - Dungar the only player to reach double figures before being bowled by the impressive 13 year old Jamie Smith who ended up with 2 wickets and just 3 runs conceded for his 5 overs (including 2 maidens). The Hawks were 90 runs short of their target with 14 overs still to play but the frequent loss of wickets had proved costly.

Hawks were well and truly beaten on the day by the better side but new friends were made and an early finish meant that both sides could enjoy the final ten overs of the England v India World Cup match - the tin of sin also faired very well on the day!

Man of the Match: Will Parker