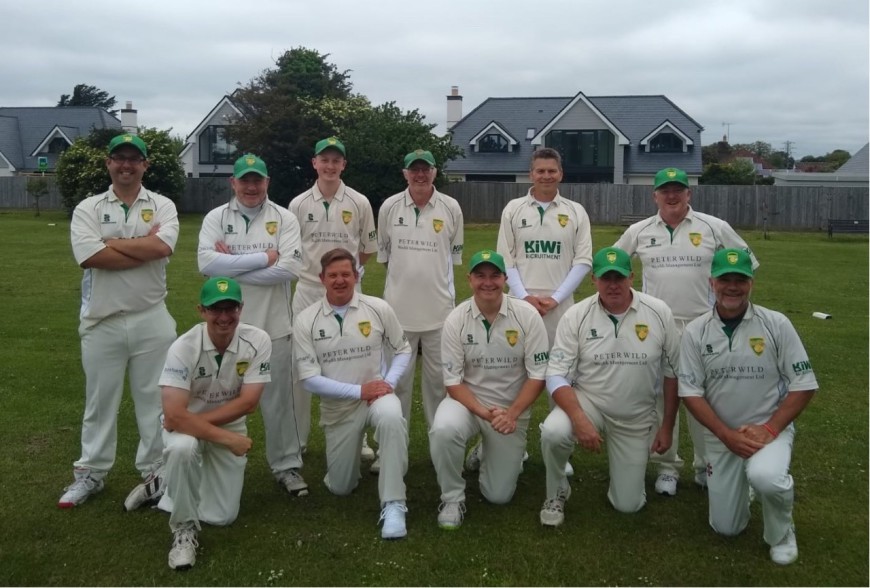 It's been a long eight years but Chidham & Hambrook finally completed their second tour of duty at the weekend and maintained their unbeaten record on the road in the process with a superb victory at Ferring on the Saturday. Five tourists remained from the inaugral trip to Brighton back in 2013 which saw last gasp wins over Hove and Wisborough Green: Keith Davey, Steve Clark, Vinnie Smith, Paul O'Donohoe and Clive Dungar, and they all played their part in another memorable weekend.

The majority of the team met up in the Barleycorn Saturday morning for a sumptuous buffet-style cooked breakfast all washed down with a few beers, and club skipper Keith Davey also brought along twelfth man Hillary Hawk for moral support - she certainly raised a few eyebrows during the weekend. Special mentions to Tom Phizackerley who made the four hour journey down from Nottingham University and Clive Dungar who travelled down from London - they both met the rest of the team at Ferring cricket club.

The Ferring game had originally been in doubt due to heavy rain in the previous 24 hours but the all-clear had been given in the morning and the players arrived to overcast conditions with a wet outfield and a very sticky undulating wicket. Phizackerley was tasked with captaining the team for the day but he unfortunately failed in his first duty and the Hawks were put into bat with Peterson and Davey opening. Both players stayed firm during the first ten overs and with the aid of a short boundary on the far side of the pitch the pair had amassed 71 runs before a change of bowler saw Davey (10) caught and bowled by Ferring skipper Chris Tams. The same player then bowled out Peterson (66) in the 17th over but Hawks number 3 Phizackerley was starting to see the ball really well and got the scoreboard ticking along again. His partners at the crease (O'Donohoe 8, Smith 8, Wild 9) all came and went one by one but by the close of the innings Phizackerley had reached 68 runs leaving Ferring chasing 186 for the victory.

Andy Clark and John Strudwick opened the bowling for the Hawks and despite a shaky start, Strudwick the "oldest swinger in town" finally got his just desserts with 2 wickets thanks to a Peterson catch and an LBW appeal. Ferring were still up with the run rate though until Peterson demolished their hopes with 4 well taken wickets including a catch from Phizackerley. The drizzle started to arrive for the last 10 overs and Scully-Horner got the ball turning beautifully for no reward bar a maiden but Dungar, playing hist first match in 2 years got a wicket with his very first ball thanks to a catch from Steve Clark behind the stumps. Andy Clark almost made a dramatic catch of his own at mid-wicket but only had a sore finger to show for his efforts and Dungar added a second wicket late in the day to leave Ferring 39 runs short of their target.

The Hawks returned to the local Henty Arms for refreshments with their wonderful hosts before setting off for Brighton and their base for the night, the Mecure hotel on the seafront. Upon arrival the players learnt that Wisborough Green were disappointingly unable to raise a team for the Sunday tour fixture so it was to a be a no holds barred night on the town with a mixture of seafront bars, Irish bars and kebabs. Several players woke up the next morning with a very sore head and after another cooked breakfast the team set off for a jolly boys outing on Brighton seafront. After a walk along the pier Dungar and O'Donohoe decided the best way to shake off their hangovers was to throw themselves down a 100ft high zip wire with Dungar winning by a short head, whilst the other players tucked into some more alcohol or enjoyed a paddle in the sea. Just enough time for a few cocktails and some sea food before the players returned home to spend some unexpected time with their families (or in some cases a game of virtual cricket in the Barleycorn washed down with yet more beers).

A most enjoyable weekend was had by all and talks of a tour in 2022 are already underway.

Man of the Ferring match: Rory Peterson (66 runs and 4 wickets)