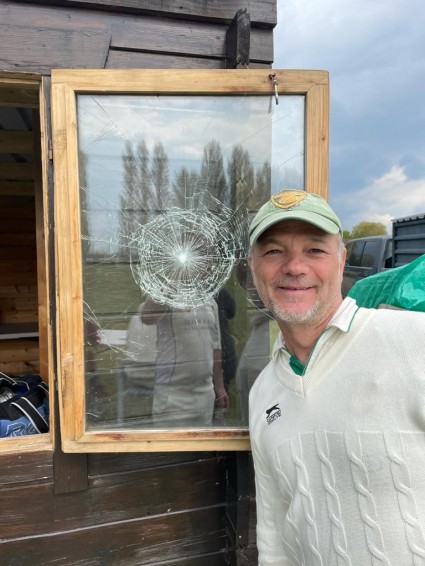 The clubhouse window smashed by a Rory Peterson six

Chidham & Hambrook made it two Sunday wins on the bounce with an ultimately comfortable 27 win victory over Lavant.

The victory didn't look likely at one stage with the visitors just 60 runs short of their target and 10 overs left to play but Hawks skipper Keith Davey turned to his big guns Adam Selves and Rory Peterson, who had been wicket keeper up until that point, to demolish the Lavant batting order. Selves bowled superbly and took 4 wickets in his 7 overs and Peterson also grabbed a wicket from his 4 overs - earlier Matt Hill had taken the big scalp of J Allen who was on 53 runs at the time.

Having won the toss befoe the match, Davey elected for the Hawks to bat first and opener Jason Burt was soon gone LBW closely followed by Davey himself who was bowled first ball. Peterson stayed firm though and was ticking along nicely with multiple boundaries, including a six which smashed a clubhouse window, but he was eventually caught by a superb catch from David when on 37 runs (bowler Lee R). Selves added a decent 20 runs to the innings before being undone by an LBW appeal and O'Donohoe also performed well at the crease recording 34 runs before being caught out. Hawks number six Willem Van Niekerk gave the best bating display of the day though with his gung-ho approach and made 71 runs not out before the close of the innings - Smith (9) and Pine (7) added some extra runs to leave the home side on a decent 191-8 which proved too much for Lavant in the end.

The Hawks travel to Milbury (Upham) on Thursday weather permitting but the injured duo of Steve Clark (ribs) and Stuart Turner (hamstring) are unlikely to feature. 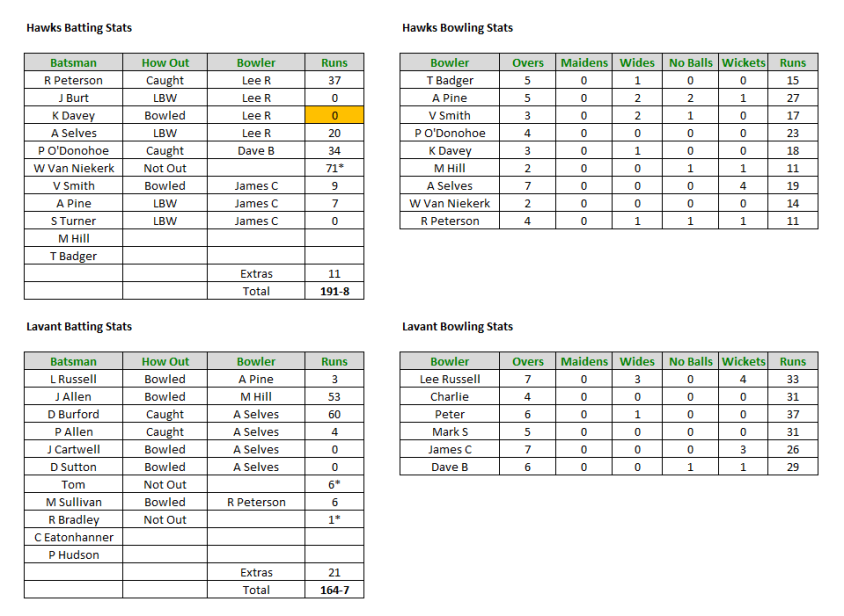