Tennis Club won the toss and opted to field first

The Hawks were comprehensively beaten by Chichester Tennis Club on Thursday evening in a match which mirrored the weather for the homeside - a sunny bright start and a dull damp finish.

By the end of the third over the Chidham openers of Davey and Peterson had already amassed a total of 42 runs for no loss in the sunshine and with Peterson safely back in the clubhouse a big score looked on the cards. But the visitors had other ideas and with a steady increase in bowling ability the Hawks wickets started to tumble - Van NIekerk (0), Gottesman (2), Davey (13) and Smith (1) were soon gone with only Wild (13) getting into double figures with a nice few boundaries before being caught.

The Hawks tail enders suffered a similar fate and there was no protection left for the returning Peterson at the end of the innings which saw Chidham finish on 111 all out with 11 balls still to come.

The Tennis Club batsmen appeared to come from a different planet with some expert stroke play that saw the Hawks finest bowlers being smashed around the park and openers Whitehouse and Henshaw were soon retired on 25 runs. Andy Clark took the wicket of Woodruff (14) thanks to a good catch from Steve Clark and Peterson bowled out Warr (2) but Palmer (24) and L. Gibbons (15) got the Tennis Club over the line with 8 wickets and 7 overs to spare.

Probably one of Chidham's heaviest ever defeats but the troops will return stronger and wiser next time. A number of Hawks players attended the Sussex and Hampshire T20 blast matches on Friday evening and hopefully learnt a lesson or two - Middlesex were certainly beaten by Sussex in a similar fashion to the way the Tennis Club ripped apart the Hawks. 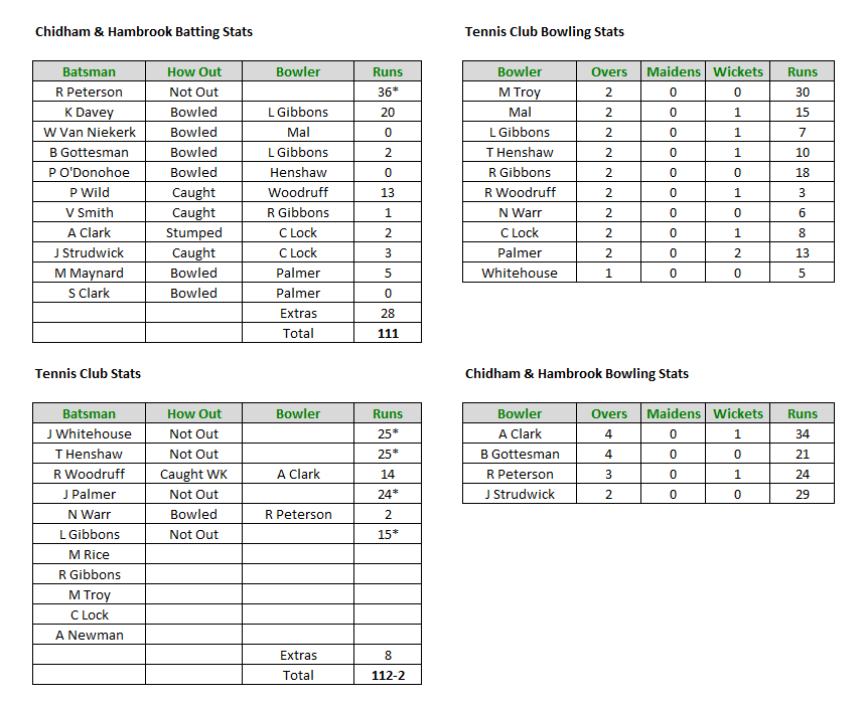