Hawks Stay in Trophy With Win at Racqueteers

Chidham & Hambrook maintained their slim chances of winning the inaugral Chichester Harbour Gin Trophy with a close fought victory at Racqueteers on Thursday night. The Hawks had been on the receiving end of a 41 run defeat against the Hayling Island opposition the previous week so this was a must win game to keep their trophy ambitions alive.

Hawks openers Gottesman (9) and Parker (10) were both caught in the first 5 overs before Van Niekerk rattled off a quick 27 and forced retirement. O'Donohoe (6) and Loten (1) were soon gone but Pistol Wild got things back on the track for Chidham with a spendid knock of 25. Charlie (13) and Maynard (16*) added some additional runs before utter carnage ensued in the final over - Jameson bowled HIll, Dungar and Clark for a hat-trick of golden ducks and then took the wicket of the returning Van Niekerk with the very last ball.

The home side were very confident of reaching their target of 138 runs and were even more so after opener Danby was back in the hutch. However the supporting cast came and went; Cottle (4), McMurragh (4) and Singleton (3) before McCuk (18), Steele (10) and Jameson (12) added some much needed runs. Some tight bowling from the Hawks, notably Van Niekerk taking 3 wickets and Dungar 2 wickets, left Racqueteers needing 19 runs from the last over - with Danby returning for the last 5 balls it wasn't a forlorn hope but they ended up 9 runs short of their target.

Man of the Match: Will Van Niekerk 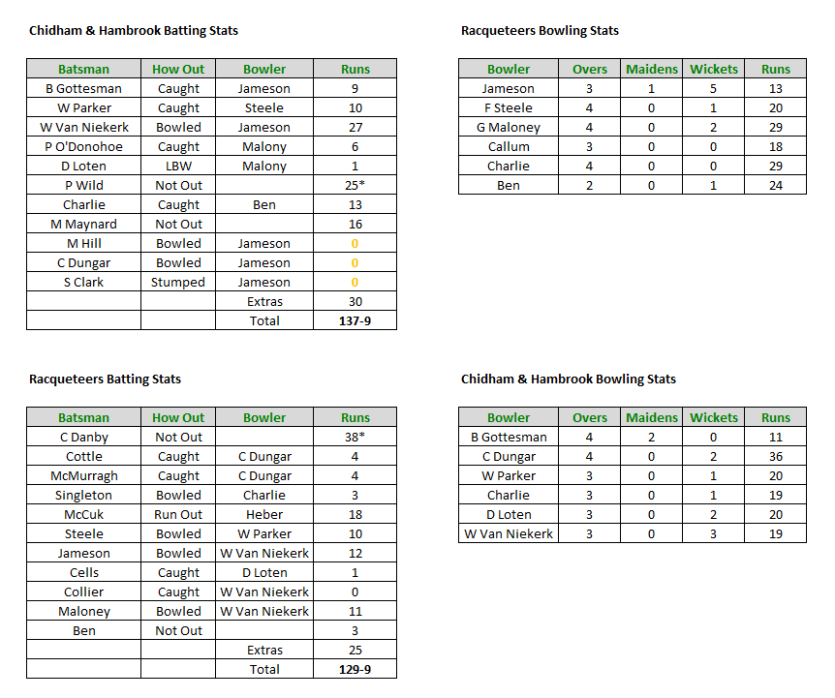